ALASTAIR DICKSON
ALASTAIR DICKSON
I was born and grew up in the town of Dunfermline, on the east coast of Scotland. After high school I moved to the ‘big city’ of Edinburgh to attend the College of Art, graduating with a diploma in sculpture in 1975. A gap year saw me working as a trainee nurse in a security mental hospital near Liverpool as well as a stint busking in the south of France.

After college I moved to Munich to learn German, play music and to study theatre arts. Four years later I returned to London, England to an uncertain future. Around this time I discovered my talent for woodworking and started a custom woodworking business.
Although I did initially harbour ambitions to become a professional musician, I found I was more temperamentally suited to life as a sculptor and woodworker. Music, however still plays an important role in my life.

A chance meeting with an old art college friend in London’s Heathrow airport resulted in an invitation to visit Canada–specifically Toronto Island, where my friend had grown up and now lived. I was intrigued by Island life and decided to stay for a little while. That was in 1981.

It took me a few years to get back into a full time studio practice, working from home and then from studio space in the city. When the former Island Public and Natural Science School was converted into Artscape Gibraltar Point Centre for the Arts in 1999, I was fortunate to become one of the first long-term tenants and have had a studio there ever since.

Gibraltar Point is unique in terms of its location which is relatively isolated yet just a ferry ride from downtown Toronto. Artists and writers come and go, providing a stimulating environment. The beach is a minute’s walk away. The park hosts millions of visitors in the summer and returns to a quiet serenity in the winter, highlighting the changes in the seasons. I consider myself truly fortunate to live and work in such a special environment. 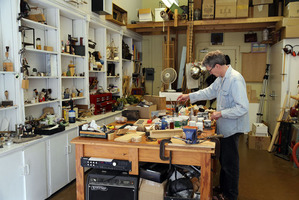